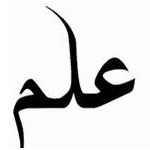 Driving along a busy road, a quick flash on the neon sign board of a store caught my attention. “Knowing is Knowledge.” As simple and nice the statement is, far from the fact it is, was the thought

that ran into my mind. Knowing cannot just be knowledge. Knowing is one of the requisites to obtain knowledge could be a better phrase. But this wrong notion has been imbedded into the minds of many among us.

There is a story in the Islamic literature attributed to Abu Hamid Al-Ghazali (d. 505 h/1111 c.e.). He used to travel from village to village with his donkey loaded with the books he collected proudly. He thought that it is the evidence of his vast knowledge. During one such travel some robbers intercepted him stole his donkey and all his books. Imam Ghazali was grateful that they had spared his life. But unwilling to bear the loss of those books which is of great worth to him, he begged the chief brigand to return to him his books. The chief asked him why he needed them. Al-Ghazali responded that they contained his knowledge. “If when I take your books I steal your knowledge, then truly you possess no knowledge at all” was the astute reply from the robber.

Seeking knowledge is not just an option that you can skip through, but an obligation in Islam. Prophet (peace and blessings of Allah be upon him) explained the superiority of the knowledge stating that, “Whoever follows a path in the pursuit of knowledge, Allah will make a path to Paradise easy for him.” (Narrated by al-Bukhari, Kitaab al-‘Ilm, 10)

But there is no goodness in knowledge which is not confirmed by action, or words which are not confirmed by deeds.  Allah the Most Exalted says in the Quran, “O you who believe! Why do you say that which you do not do? Most hateful it is with Allah that you say that which you do not do” (Surah al-Saff 61 : Aayah 2-3). Further regarding the objective of the knowledge He, the Almighty says, “It is only those who have knowledge among His slaves that fear Allah” (SurahFaatir 35:28).

Imam Ath-Thahabi who wrote Sufyan’s biography narrated an incident of him and Al-Mansour, the strong Abbasid Caliph. Sufyan held himself to the highest standards of knowledge and courage. Once while in Makkah Sufyan was making tawaf when Al-Mansour saw him. He went to him and patted him on the shoulder but Sufyan did not recognize who he was. After introducing himself, Al-Mansour asked Sufyan for a sincere advice. Sufyan asked him, “Have you implemented what you know (of Islamic Shari’ah) so that (there is a need) for me to teach what you do not know?” and firmly declined telling him any advice. This slowly led Sufyan to the encounter of persecution by Al-Mansour is a different story.

One can consume endless amounts of information and knowledge and still do not experience any genuine change because implementation is the factor that defines the knowledge.

All these remind me of a fact – I’m yet to be a student.