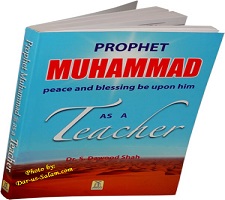 This man is a glorious teacher for his people, as anyone can come to know. In this book, the author, however, more often than not compares Prophet Muhammad (PBUH) to other Prophets in the Islamical line of the men who had been sent down to send the same message. Namely,

This book, more importantly, deals with how the Prophet administered his message. In Arabia during the Prophet Muhammad’s (PBUH) time, eloquence of speech could just about get a person anywhere. And the Prophet was gifted with being so eloquent to the point that he could be claimed as the most eloquent amongst the people, with a style of speech and using methods that kept his audience intrigued and attentive to whatever the Prophet would say. His style of speech used was short, simple, and directly to the point when directly putting into place something that the people must do, and to further push it into the minds of people, and enhance comprehension, he would have the tendency to not just say it once, but to say it three times. But he was also masterful of invoking thought provoking reactions amongst his people when speaking – posing questions with creativity; an essential amongst great teachers for the reason being that it helps their students learn all the more further, whomever their students may be. The Prophet would also encourage his people to ask questions themselves, with all the intent for anyone and everyone to gain as much as knowledge as possible – for indeed, knowledge was crucial for the Prophet’s people. And other methods he would use was humor – a necessity to keep an audience actively engaged – fables to help implement the lesson he was teaching, figures of speech and metaphors. Using all these methods that basically lead up to a successful teacher, his accomplishments were easily made for whichever rule he had wanted to implement upon his people.

His speech wasn’t mere words, as it is shown but with more than the average of ‘brains behind his intents’. Because even though Science and Psychology wasn’t an active study back then, especially in Arabia where the prospect of science is more closer to being unheard of, the Prophet Muhammad (PBUH) was still skilled in using scientific methods for teaching and reforming, as well as using levels of Psychology. Such scientific methods he used then could be referred to as “Observation, Correction, Representation by diagrams, Practical demonstration etc.” (Shah, S. Dawood). His psychological driven methods were more of looking into his people’s lives and coming to the best of decision on how to help them learn – while still accommodating with they – the people’s – lives best. Such as with people having differentiating time schedules or varying levels of interests, and accommodating that along with the differences between the people and their talents, their skills, and their character. And appreciating and complimenting the people, which were well made decisions for motivations. With all these particularities in mind, keeping thought of the individuality of his people to bring them to a whole and administering all that could be needed to make the person become a better person in life essentially, the Prophet succeeded in what he had been made to do, and that was accomplished by using traits that are considered what is to be the most important for accomplishment even in the modern world today.