Realism, a contradiction to romanticism, can be found in many aspects of daily life today. Something that can only be defined as an honest depiction, which had formed during the Industrial Revolution. The first depiction of history was given via

realistic art through the forms of paintings and photography during the times of the Industrial Revolution. This brought on new techniques for paintings which has been in use until the modern day. Later on, history started to be recorded through literature as well, with realists capturing the happenings of life. This successfully appealed to readers and so realistic literature could be brought down to the modern day. The involvement of power also concerned realistic politicians, and realistic paintings were made to show the involvement of politicians with the people during the Industrial Revolution. Thus, since the start of Industrial Revolution until today, realism has affected history with its efficiency and for that, it can still be found today.

The reason for realistic art’s succession was its ability to bring about newer, modern changes. Not only did realism teach new artistic methods and bring developments for photographical art, but also because the portrayal of the art appealed to the public. Edouard Manet (1832-1883), a realistic painter who used different painting methods and one amongst many to bring new procedures to art. It is mentioned that “His work scandalized the French Academy and was rejected, but it heralded new and influential painting techniques.” Though Edouard’s paintings were initially dismissed by the public, it still taught newer forms to painting in a realistic light. Admittedly, some certain paintings depicting reality caused outrage amongst the people, but only due to the visual it provided of the world striking true. For example, Jean Francois Millet (1814-1875); “His most famous work is the Gleaners, rendering three women bend down, searching for the last wheat scraps. This work created a scandal at its exhibition at the Salon in 1957, because of the true depiction of poverty which was politically frightening to the bourgeois viewers.” For all that Jean Francois Millet’s painting had caused disruption amongst the public, nonetheless there were many painters who continued to create paintings that mainly showed of poverty, and many painters continued to work on realistic paintings. Photography was also involved along with painting, particularly by one Eadweard Muybridge (1830-1904). He had “also conducted photographic motion studies that heralded the development of the movie camera and influenced later painters.” Works such as these were what brought attention to themselves for the reality they depicted; the process in which the art was created and the light it garnered, not to mention the developments to photography. Influencing many branches of art and bringing new modern ideas and changes were the main reason for realistic art’s succession. 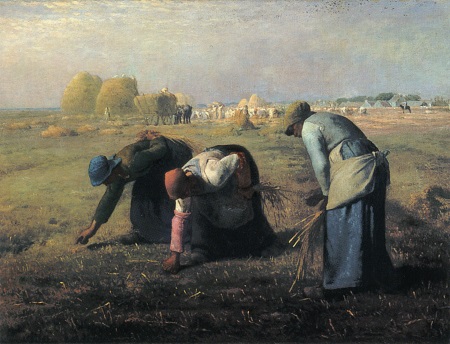 Realistic literature’s ability to relate with the people and appealing to them while depicting history was the main reason for its succession. By depicting history, realists then had also impacted the future with just reports of the present itself.   It is mentioned in one source as; ‘According to William Harmon and Hugh Holman, “… realists center their attention to a remarkable degree on the immediate, the here and now, the specific action, and the verifiable consequence” (A Handbook to Literature 428)’. Not only successfully impacting the future until the modern day but even when realistic literature had first started to take place during the industrial revolution times, it had attracted the readers with its simple – yet harsh – truth. As reported by a source referring to the realistic writers; “They drew upon the sometimes grim realities of everyday life, showing the breakdown of traditional values and the growing plight of the new urban poor. American realists built their plots and characters around people’s ordinary, everyday lives … As a result, readers were attracted to the realists because they saw their own struggles in print … America was shifting into higher gear and readers wanted writers who clearly communicated the complexities of their human experiences.” Hence, realistic literature appealed to the public with its capability to relate and keeping up to standards with the people’s wants as the times steadily progressed, all the while continuing to represent the real world.

Due to art with political undertones and involvement, Western Art was remodeled. Gustave Courbet (1819-1877); a realistic painter is a main reason for the major reformation of Western Art with a history including politics. His involvement with politics was shown through his paintings, as reported by one source; “Courbet proclaimed his new political commitment (to the Revolution) in three large paintings submitted to the Salon of 1850.” One such painting is ‘A Burial at Ornans’ in which it shows a visual of a burial painted in a realistic depiction. His participation with politics in this particular painting is that; “his political convictions are especially evident in the individual attention and sympathetic treatment he accords the ordinary citizens of Ornans.” It is said that Gustave Courbet “…became one of the most influential mid-19th century French painters.” And sure enough, in another source, his paintings were influential indeed, for it is said that “Gustave Courbet’s democratic eye revolutionized Western Art.” Thus, with political involvement in hand, art today had been transformed by one such realistic painter.