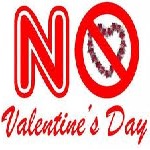 Valentine’s Day is a jaahili Roman festival, which continued to be celebrated until after the Romans became Christian. This festival became connected with the saint known as Valentine who

was sentenced to death on 14 February 270 CE. The kuffaar still celebrate this festival, during which immorality and evil are practiced widely. It is not permissible for a Muslim to celebrate any of the festivals of the kuffaar, because festivals come under the heading of shar’i issues which are to be based on the sound texts.

Shaykh al-Islam Ibn Taymiyah (may Allaah have mercy on him) said: Festivals are part of sharee’ah, clear way and rituals of which Allaah says (interpretation of the meaning):

“For every nation We have ordained religious ceremonies which they must follow” [al-Hajj 22:67]

Partially joining in, at the very least, is disobedience and sin. This was indicated by the Prophet (peace and blessings of Allaah be upon him) when he said: “Every people has its festival and this is our festival.” This is worse than joining them in wearing the zinaar (a garment that was worn only by ahl al-dhimmah) and other characteristics of theirs, for those characteristics are man-made and are not part of their religion, rather the purpose behind them is simply to distinguish between a Muslim and a kaafir. As for the festival and its rituals, this is part of the religion which is cursed along with its followers, so joining in with it is joining in with something that is a cause of incurring the wrath and punishment of Allaah. End quote from Iqtida’ al-Siraat al-Mustaqeem (1/207).

He also said (may Allaah have mercy on him): It is not permissible for the Muslims to imitate them in anything that is uniquely a part of their festivals, whether it be food, clothing, bathing, lighting fires, refraining from a regular habit, doing acts of worship or anything else. It is not permissible to give a feast or to give gifts, or to sell anything that will help them to do that for that purpose, or to allow children and others to play games that are part of the festivals, or to wear one’s adornments.

Al-Haafiz al-Dhahabi (may Allaah have mercy on him) said: If the Christians have a festival, and the Jews have a festival, it is only for them, so no Muslim should join them in that, just as no Muslim should join them in their religion or their direction of prayer. End quote from Tashabbuh al-Khasees bi Ahl al-Khamees, published in Majallat al-Hikmah (4/193).

This indicates that festivals are among the characteristics by which nations are distinguished, and it is not permissible to celebrate the festivals of the ignorant and the mushrikeen (polytheists).

The scholars have issued fatwas stating that it is haraam to celebrate Valentine’s Day.

1 – Shaykh Ibn ‘Uthaymeen (may Allaah have mercy on him) was asked:

In recent times the celebration of Valentine’s Day has become widespread, especially among female students. It is a Christian festival where people dress completely in red, including clothes and shoes, and they exchange red flowers. We hope that you can explain the ruling on celebrating this festival, and what your advice is to Muslims with regard to such matters; may Allaah bless you and take care of you.

Celebrating Valentine’s Day is not permissible for a number of reasons.

It is not permissible on this day to do any of the things that are characteristic of this festival, whether that has to do with food, drinks, clothing, exchanging gifts or anything else.

The Muslim should be proud of his religion and should not be a weak character who follows every Tom, Dick and Harry. I ask Allaah to protect the Muslims from all temptations, visible and invisible, and to protect us and guide us.

2 – The Standing Committee was asked: Some people celebrate Valentine’s Day on the fourteenth of February every year. They exchange gifts of red roses and wear red clothes and congratulate one another. Some bakeries make red coloured sweets and draw hearts on them, and some stores advertise products that are especially for this day. What is your opinion on the following:

The clear evidence of the Qur’aan and Sunnah – and the consensus of the early generations of this ummah – indicates that there are only two festivals in Islam: Eid al-Fitr and Eid al-Adha. Any other festivals that have to do with a person, a group, an event or anything else are innovated festivals, which it is not permissible for Muslims to observe, approve of or express joy on those occasions, or to help others to celebrate them in any way, because that is transgressing the sacred limits of Allaah, and whoever transgresses the sacred limits of Allaah has wronged himself. If the fabricated festival is also a festival of the kuffaar, then the sin is even greater, because this is imitating them and it is a kind of taking them as close friends, and Allaah has forbidden the believers to imitate them and take them as close friends in His Holy Book. And it is proven that the Prophet (peace and blessings of Allaah be upon him) said: “Whoever imitates a people is one of them.” Valentine’s Day comes under this heading because it is an idolatrous Christian festival, so it is not permissible for a Muslim who believes in Allaah and the Last Day to observe it or approve of it or congratulate people on it. Rather he has to ignore it and avoid it, in obedience to Allaah and His Messenger, and so as to keep away from the causes that incur the wrath and punishment of Allaah. It is also haraam for the Muslim to help people to celebrate this or any other haraam festival by supplying any kind of food or drink, or buying or selling or manufacturing or giving or advertising etc., because all of that is cooperating in sin and transgression and is disobedience towards Allaah and His Messenger (peace and blessings of Allaah be upon him). Allaah says (interpretation of the meaning):

“Help you one another in Al‑Birr and At‑Taqwa (virtue, righteousness and piety); but do not help one another in sin and transgression. And fear Allaah. Verily, Allaah is Severe in punishment” [al-Maa’idah 5:2]

The Muslim must adhere to the Book of Allaah and the Sunnah in all his affairs, especially at times of fitnah when evil is widespread. He should be smart and avoid falling into the misguidance of those who have earned Allaah’s anger and who have gone astray, and the evildoers who have no fear of Allaah and who do not have any pride in being Muslims. The Muslim must turn to Allaah and seek His guidance and remain steadfast in following it, for there is no Guide except Allaah and no one can make a person steadfast but Him. And Allaah is the source of strength. May Allaah send blessings and peace upon our Prophet Muhammad and his family and companions. End quote.

3 – Shaykh Ibn Jibreen (may Allaah preserve him) was asked:

Among our young men and women it has become common to celebrate Valentine’s Day, which is named after a saint who is venerated by the Christians, who celebrate it every year on February 14, when they exchange gifts and red roses, and they wear red clothes. What is the ruling on celebrating this day and exchanging gifts?

Firstly: it is not permissible to celebrate these innovated festivals, because it is an innovation for which there is no basis in Islam. It comes under the heading of the hadeeth of ‘Aa’ishah (may Allaah be pleased with her), according to which the Prophet (peace and blessings of Allaah be upon him) said: “Whoever introduces anything into this matter of ours that is not part of it will have it rejected.”

Secondly: it involves imitating the kuffaar and copying them by venerating that which they venerate and respecting their festivals and rituals, and imitating them in something that is part of their religion. In the hadeeth it says: “Whoever imitates a people is one of them.”

Thirdly: it results in evils and haraam things such as wasting time, singing, music, extravagance, unveiling, wanton display, men mixing with women, women appearing before men other than their mahrams, and other haraam things, or things that are a means that leads to immorality. That cannot be excused by the claim that this is a kind of entertainment and fun. The one who is sincere towards himself should keep away from sin and the means that lead to it.

Based on this, it is not permissible to sell these gifts and roses, if it is known that the purchaser celebrates these festivals or will give these things as gifts on those days, so that the seller will not be a partner of the one who does those innovations. And Allaah knows best. End quote.

Ramadan – The Month of Quran

Virtues of the first ten days of Dhu’l-Hijjah

Virtues of the first ten days of...