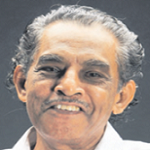 Journalist and writer J.M. Sali is one of those who are inexhaustible troves of stories – having written more than 400 fictional short stories, 80 plays and 200 articles in a career spanning more than 50 years.

His output is eclectic, spanning the highbrow, such as award-winning novels and serialised stories in magazines, to the lowbrow, such as biographies of popular figures such as Bruce Lee and Muhammad Ali. All his works are in Tamil. His extensive contributions to Tamil writing have won him numerous honours both locally and abroad, such as the Singapore Book Award for Fiction in Tamil for his short story collection Nonbu (Fasting) from the National Book Development Council Of Singapore in 1996, and the Tamizhavel Literary Award from the Association of Singapore Tamil Writers in 2001.

The Madras-born writer published his first book in 1961, a children’s book called Two Eyes, about the friendship between a Hindu, a Muslim and a Christian boy. His father was a betel leaf seller and his mother a housewife. He had two brothers and sisters who have all died. A popular writer who contributed to several magazines in India, he was invited to join Tamil Murasu, Singapore’s Tamil language newspaper, in 1964. So he sailed to Singapore at age 25 to work as an assistant editor at the paper.

He went back to India in 1971, where he worked for several other magazines before returning to Singapore in 1983 to work as a senior broadcast journalist at the then Singapore Broadcast Corporation. He wrote and translated news bulletins for both radio and television. Being in close contact with the news of the day gave him  lots of information to spin out books on popular personalities, such as five books on the late actor Bruce Lee, an icon of martial arts cinema, and three on Muhammad Ali.

He said: “As a news editor, we had more information in those days. Now, of course, you can get the information for free off the Internet. But back then, it was different. These books were very popular and the sales were very helpful to me.”

One of his books, Alaikal Pesukinrana (The Sound Of The Waves, 1975), has been reprinted and is being taught at SIM University as a text for students studying Tamil. The novel is about a married man in India who moves to Singapore and is forced by circumstance to marry another woman, and explores the themes of love and sacrifice.Sali retired from journalism in 2000 and has become a full-time writer, in addition to doing Tamil language translation for the National Archives and the National Heritage Board.

He has one son, 26, who is studying business management at SIM University. His wife, 60, is a housewife. The Cultural Medallion is a great honour on top of the numerous awards he has received, he says.

The $80,000 grant would be useful in helping him re-publish his serialised fiction.

“Although I have written 55 books, I would still like to continue to publish more. A lot of my work is in magazines and I would like to gather them all in one volume.”

A Sound reader can become a creator – J.M. Sali