The Monster Mystery – 2 It starts 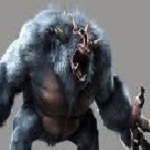 As Cassandra and Vanessa were heading back upstairs Vanessa kept asking whose turn was it to play chess. “We were going to watch Monster vs. Aliens after you wanted to get some

thing.” Cassandra replied. Before Vanessa could ask again there was a big breeze that a tree branch started scratching the window.

The girls got so scared of the noise that they screamed.

“What happened girls, please tell me and let there be a good reason, you scared me.” Mama Savannah said worryingly.

“Mamaaa!” Both Vanessa and Cassandra yelled. Cassandra couldn’t help it but had to lift Vanessa or else Vanessa would have fallen. Papa Henry who was nearer and not working in the kitchen like Mama Savannah came running upstairs where both girls were with Cassandra holding Vanessa who was sucking her thumb.

“What happened there? Is everyone all – oh! So that’s the problem here huh?” asked Papa Henry figuring out what had scared both girls.

“W-What s-scared us P-Papa?” asked Vanessa who was scared and was still sucking her thumb.

“Come here and I will tell you right away. Now don’t be scared. You see now then wind was blowing right? Right. So the wind made the tree branch scratch the window. Now you weren’t scared of that, were you?” Papa Henry asked with a chuckle. Vanessa couldn’t answer.

She thought, “He is tricking me, but yet how am I to answer?” Vanessa couldn’t think but Cassandra rescued her, “Oh, well you see we didn’t know, so we got scared but since you told us about it and we realized what it was we got rid of our fear.” Cassandra said smartly with a British accent.

“Well anyway if we hear anything like that we will at least know it is the wind blowing on the tree causing it to scratch the window.” said Cassandra.

“Oh yeah, sure” said Vanessa who had a wide smile on her face.

“What’s up? You look really creepy with that smile on your face.” Cassandra said finally dropping her and backing away with a scared look on her face.

“Why are you backing away?” asked Vanessa the smile gone from her face.

“Nothing” said Cassandra shivering and coming back closer to Vanessa. “You know what? I am going to get some ice cream to cool me down. Do you want any?” asked Cassandra. Vanessa nodded. “Then get it yourself!” said Cassandra heading back downstairs. “Um … I like ‘Cookies ‘N’ Cream’. Do I want that or, ooh … mint, I will just stick to my first choice.” said Cassandra taking the ice cream ‘Cookies ‘N’ Cream’. After filling up their bowls, Vanessa and Cassandra went back upstairs. Even though the wind blew making it to cause the tree branch scratch the window again, the girls didn’t mind, after all they knew what made the noise. The wind kept blowing until both girls finally climbed the ten-story staircase.

“Do me a favor will you? Tell me why you kept backing up when I was smiling. Was it because my smile was creepy?” asked Vanessa curiously.

“Uh … yes, now please do not, I repeat, do not remind me about that please” said Cassandra shivering again. “Now let’s hurry up and eat this ice cream before it melts.” Cassandra said trying to shake of the fear from her.

“Alright I get what you want. I get what you mean” before Cassandra could reply Vanessa said. “Now weren’t you going to say, ‘finally thank you!’ Huh?” said Vanessa smartly.

“Was not!” Cassandra said.

“Was too!” Vanessa said with a smile.

“Girls, what is going on up there?” Mama Savannah interrupted hearing the girl’s stompy feet.

Vanessa answered, “Nothing really, we’re just practicing an act for you to see” Vanessa was hoping her scheme worked.

“What? An act? Then we’d better get started right away or when they want to see what we got so far what will we say?” said Cassandra whispering angrily.

“Oh yeah, I haven’t thought of that” said Vanessa now from a happy face it turned to a worried one.

“Oh forget about worrying. The real thing we should worry about is the act. So like every other act they (and we) brainstorm first and then at the same time we write on paper and if we like it we should neatly do it on computer and print it out, which will be our script. Or we could just do an act that is already written like one of those books” Cassandra said out of breath for talking so fast and so long.

“Um … okay, I thought you were fast in running but it seems to be that you’re fast in talking too” said Vanessa.

“Please don’t praise me. I hate it when people do that” said Cassandra with a tired look on her face.

“Okay I get what you want. I get it. I get it” said Vanessa having an understanding face but truly not understanding. Truly she was looking out the window behind where Cassandra was standing.

“Hey did you see something fly out the window? I mean it can’t be a bird, not in a big storm – and I am not joking, I truly saw something” said Vanessa letting her fear grow each moment. Cassandra turned around and walked closer to the window with Vanessa at her heel. Cassandra wondered what could be outside in a heavy storm. Slowly walking toward the window Cassandra took a baseball bat that was lying on the side of a nearby shelf.

Cassandra was not only fast but she was also a brave, strong and a smart 10 year old. Vanessa also was strong and smart, but only a little bit brave. Vanessa was only 9 years old. But both girls looked bigger for their age, in fact both girls were the same height. And they also weighed the same.

Slowly walking closer to the window with the bat in the hitting position, she opened the window. Out came in a scary looking monster! He started fighting with Cassandra but she fought back hardly. She in fact knew how to fight, because she earned a black belt in karate.

Downstairs the doorbell was ringing furiously. Papa Henry opened the door. In came in a happy faced Uncle George and Auntie Lola.

“Now I wonder what makes you so happy?” said Papa Henry already starting to wonder.

“Why of course how could I forget?” said Papa Henry totally forgetting that tomorrow was April 4th.

“Tomorrow Vanessa will turn 10 but at the same time Cassandra will turn 11. So we will have to make 2 cakes and we get to celebrate two birthdays” said Papa Henry getting excited.

“How are we going to celebrate two birthdays when we are going to stay at home?” Uncle George asked getting confused. So that’s how Papa Henry had to explain that Cassandra was going sleepover at their home for a month because her parents were going on a business trip so Cassandra couldn’t come no matter what.

Meanwhile in Vanessa’s room Vanessa took another baseball bat and slowly inched her way to hit the monster. BAM! Vanessa hit the monster so hard that in one single jump he got to the window. And instead of flying outside and disappearing in thin air – or should they say thick air since there was a storm – like how he did when he came inside the girls room, he jumped and landed with a big thud.

“I wonder who or what that could have been?” said Cassandra thinking.

“Well any way let’s forget about that. The thing that we aren’t supposed to forget is the act. Remember? Or you still thinking about that ugh… that … that … Scary Monster?” said Vanessa scared to think about that uninvited (not really supposed to be called this but anyway) guest. Vanessa really didn’t want to think about it but if she did, she would jump and shiver at the same time.

Back downstairs everyone was either making presents or the two cakes. Because of course tomorrow was the birthday for both girls. So it was really busy downstairs.

Back upstairs Vanessa and Cassandra were picking a book to do their act. In 5 minutes though, they decided upon a book called, “The Secret Door”.

Both girls were enjoying so much that didn’t notice that the strange monster was looking at them.

The Monster Mystery – 1 The big sleep...